Last weekends lantern workshops and getting ready for next weeks parade

Posted on November 24, 2013 by admin| Comments Off on Last weekends lantern workshops and getting ready for next weeks parade

We have just had another great couple of days getting ready for next Thursdays Lantern Parade. It was very busy and I didn’t stop all day on the Saturday for lunch so thank goodness I had thought to have breakfast before I left in the morning.

We are so look

ing forward to the parade itself we made over 80 lanterns and have sold over 40 packs and with others are being made at home we decided to make some changes this year and decided to reduce the size of the lanterns in the parade. It is so tempting to make bigger lanterns however I would advise anyone planning a parade to really give some thought to both your location and the numbers of people taking part as well as observing. There is some great advice out there when it comes to ensuring that your event is as safe as it can be.

I have received some lovely emails from schools and

local groups so it is going to be really interesting to see what they have made.

Posted on November 4, 2013 by admin| Comments Off on A great couple of days creating willow lanterns

I have just spent a great couple of days running lantern building workshops at the Brooks Center in Winchester. Because of space limitations, I decided to spend day 1 making the structures and day 2 doing the decorating. this worked really well when your creating 40 lanterns in a day it is very tiring and changing over the materials midway would have just been to difficult so a plan that worked well.

The next couple of workshops are on the weekend of the 16th and 17th November I am not sure if there are are any spaces left its been so popular this year, we’ve made up packs to make at home and they are going fast.

Comments Off on A great couple of days creating willow lanterns

Posted in festival themes, projects commisions and the like, willow lanterns, Workshops classes and activities

I spent a lovely day on Saturday training up my lantern parade workshops volunteers, such a lovely group of people all happy to give up their spare time to help me to support the participants who will attend out lantern-making workshops starting this week.

We attracted a large audience of passing spectators curious as to what we were doing, we were still awaiting our posters to arrive from the printers so I decided to write some details on a couple of sheets of paper so that people knew what we were up to.

Posted in Murals and large scale art works, projects commisions and the like, Workshops classes and activities

Getting ready for the lantern parade workshops, moving into our unit at the Brooks Winchester

I’ve just spent the day moving all of our materials and equipment into our pop up shop at the Brooks Center in Winchester. The centre has been great allowing us to use the space for a peppercorn rate we couldn’t do it without their support, I have put up three examples that I have made to show my new volunteers I  cant wait for the ceiling to start filling with examples that they make on Saturday.

I also introduced myself to my local shop staff and Costa Coffee came up trumps when they popped in and offered to donate us free hot drink vouchers for the lantern workshop participants to have when they finish their session a lovely thought. 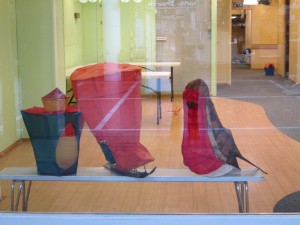 Posted in meandering thoughts, projects commisions and the like

Winchester Lantern Parade , getting ready for this years event

This years parade is different to past years , as it is a stand alone event with a 5o’s style band the Cadillacs playing in the Cathedral grounds as well as a variety of other entertainment with of course the parade were planning a celebration feel to our event

Its going to be great fun .

Ive also put together a information sheet for anyone wanting to make their own lanterns which you can find on my ….Free hints, tips and resources page

If you want to join in with this years parade either as a participant or as a a volunter please contact the Cathedral for more details http://winchester-cathedral.org.uk/event/?id=346.

Posted in family activities, Murals and large scale art works, projects commisions and the like, topics relating to art and creativity, challenging yourself, willow lanterns, Workshops classes and activities

We have now completed the Eastleigh Mural project just in time for Christmas.

The  four panel design is now up and I am ready to take a well earned rest just in time for Christmas , it has been so lovely to receive  positive comments  from local residents they have been a great talking point for families living nearby who have loved the color and different things to look at  a great talking point for families with young children in particular, as with all projects that involve the community you are never quite sure what reception you might receive.

I have been very busy over the last few weeks consulting with local residents in Eastleigh about themes and ideas for their new murals, as with all such projects the difficulty is finding a common theme as everyone has such different ideas.

Many of the residents talked about what it meant to live in the area, the history as well as the present and the local countryside and how people interacted with each other.

I also needed to consider the fact that the designs would need to be multifunctional as  eventually the images would need to be  divided into smaller images and relocated at a later date, quite a tall order when in comes to creating a design that would meet the different needs.

From this we decided on two themes  and styles the first one being four panels with a theme including the local countryside , oak trees and silver birch being very relevant and one that included children.

The second would be one large design and so more traditional depicting a a central focus  including different  images  relevant to the area.

As would would be impossible to predict how many residents would be able to get involved in creating the design and  as we were so close to Christmas I engaged a assistant to help out on a couple of days  .

On the 8th of December I started on the week long project at a local hall.

Posted in family activities, Murals and large scale art works, projects commisions and the like

I decided that although it  needed more depth of color.

The second draft now has more color depth and detail as I have added flecks of green into the darker sections.  I really enjoyed the challenge of building up the different layers of color and depth which are revealed when it is viewed from  different angles  unfortunately this photograph does not show  here.

The final version now hanging on the clients wall

Posted in my creative work, projects commisions and the like

Day 4 or the last day of the mural project

Thankfully the last day was much better and we spend the day patching up and pulling everything together outlining etc.
As an artist you have an interesting part to play when working on this kind or project which is  linked to realizing an over all vision whilst working working with the participants to allow them the opportunity to interact with the piece and if appropriate add to the overall design.

Its amazing how many of the volunteers stuck with us through thick and thin and to them we were eternally grateful.

It was also lovely to hear about the reaction from the children and families at the school.. it had opened so many possibilities for the school to use this as an addition to their teaching  practice  and it was lovely to see the children interacting with the artwork pretending that they were part of the scene , asking questions about the quirky bits that we had all put in as well as recognizing sections that had been inspired by their original designs. 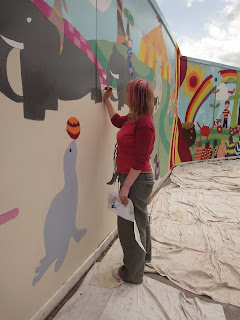 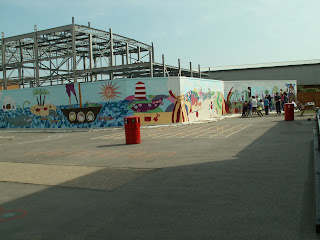 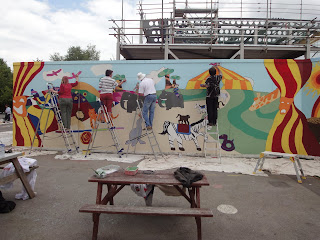 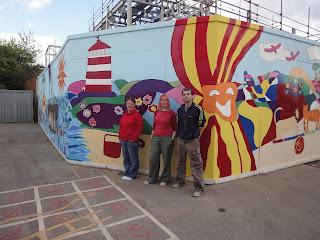 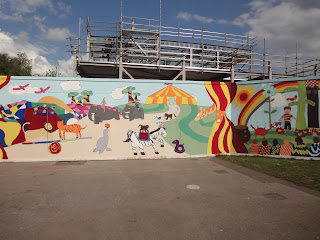 Posted in community projects, Murals and large scale art works, projects commisions and the like

Working on the mural project day 2 and 3

A great project to have been part of , lots of people joined in which was great, unfortunately week 2 and 3 were so wet that  we resorted to interspersing the painting with varnish and the drips still came through. This also meant that we needed to add a final day to the project and hoped for good weather 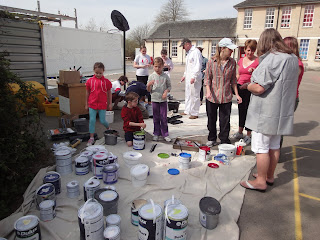 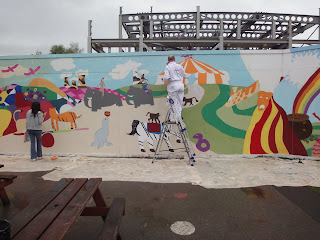 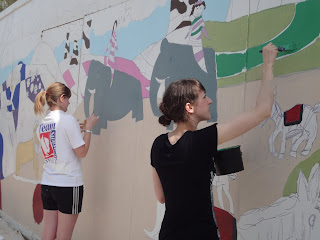 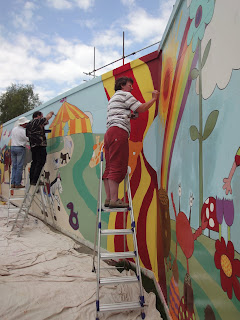 Posted in arts with school and holiday activities, information and educational activities, Murals and large scale art works, projects commisions and the like